The History of Sanger Boats

SANGER BOATS – SUPERIOR WAKESURF / WAKEBOARD BOATS
Sanger Boats, Inc., founded by Jack Davidson, was established in 1954 in the small town of Sanger, California. At the age of 16, Jack built his first 14-foot wooden boat from the instructions in a magazine. Jack married in 1950 and went on to have four children. In 1956, Jack built his first Sanger dragster for hot boat racing and began drag boat racing competition. In Berkeley, CA , in 1958, Jack set a record at the speed of 118 mph.
Jack lived in Sanger, CA and his boat company is named after that town. Jack got his start as many other early builders did, by building his own boats for his personal use. He started building all wood hulls in the early 1950’s. When he first built a flat bottom v-drive I have yet to know. In a December 1960 issue of Power Boat magazine there is an article about Jack and his early flat bottom named “White Mist”. Jack is already experimenting with ways to get the flat bottom hull “wetted area” further out of the water to get more speed for a given amount of power. He has installed two step wedges under the forward portion of the hull to do the lifting. By 1966 this hull has evolved into it’s own racing class called the “Wedge Hull” This experimentation will finally produce the three point drag & ski hydro hull which is a whole new story.

White Mist of the early 60’s was powered by a blown version of the famous 1957 392 Chrysler “Hemi” engine and it along with “Woodpecker” become the first “drag boats” Larry Schanderland drives White Mist into drag boat racing which is less than three years old. The fastest class, Top Eliminator, has already broken 100 MPH in the 1/4 mile and the most competitive engines are Caddy, Hemi, & Olds. The big Chevys & Fords are yet to be invented. 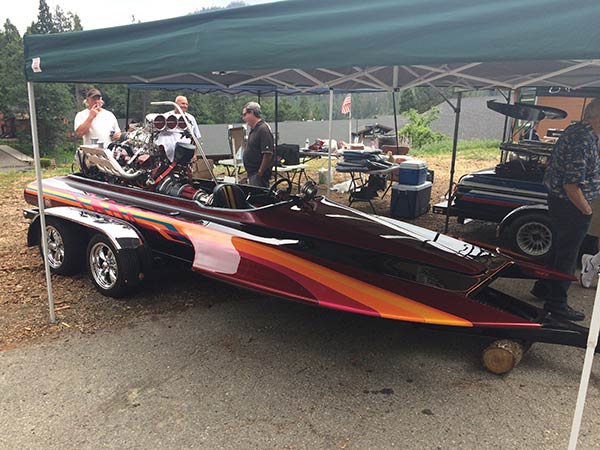 In 1961, Jack built a 17 foot glass boat called the “White Mist”. This boat was well known on the water during the early 60’s. By the mid 60’s, Jack was making various racing accessories and designed a forged steel propeller. In partnership with Larry Stellings, Jack formed Stellings Propellers, Inc. The forged steel propeller Jack designed was put on all the Sanger models during this time. Jack did not blueprint any of his ideas. Everything he did was through his own vision and ingenuity and went straight from his head to creation. 1965 was the year Jim Ramsey raced the first “Climax”, which was a Sanger shovel nose hydro model. Another popular design was the circle boat, also known as flat bottoms. Jack felt his greatest achievements were in getting the flat bottoms to work well. In 1969, Jack moved his business to Fresno and built a plant on 10 acres of land right off Highway 99, where it still stands today.

Sanger boats has building top performance boats for longer than most of our competitors. Todays Sanger is a top notch Surf, Wakeboard and Ski boat, yet the price won’t break the bank.

In 1972, in Oakland, California, Larry Schwabenland won the fastest clocked blown-fueler on the ¼ mile course at 205 m.p.h. After this record setting run, Jack became an icon of the boat racing industry. Sanger race boats were the boat of choice for many in the industry. Jack became known as “Jack the Bear” because people constantly wanted information from him while he was at the races and he did not like being bothered all the time.

At the age of 16, Jack’s son Mike began working with his dad and racing his hydro/flat bottom, the “Hot Tuna”. Jack’s daughter Kathy also started working with Jack at Sanger Boats. The 70’s was a time of retail sales for Sanger. During this time, Jack began Stellings Marine Products, selling marine hardware through the catalog he created. In 1979, due to the changing economy, the boat industry became depressed and Sanger shifted gears into family boating in the 1980’s.

This was also the year Jack started his off shore header business. This venture began when Jack attempted to purchase a set of off shore headers from another company and he was informed to “wait”. The “Bear” couldn’t wait! Sanger stopped selling boats retail in 1987 and began selling to a distributor. During the 90’s, Jack started building Alley Cats. These boats were designed for off shore racing and boating. He built a 20, 23, 29, and a 30 foot model. These were built on a special order basis.

Jack built the Alley Cats for his own pleasure because it was a boat he could take out on the California Delta. Jack’s main focus during these years was his off shore header business. Mike continued, closely with Jack, designing the Sanger family boating models and is still designing today.

In 2000, Jack built two 32 foot Alley Cat models. One was for himself and one he sold. In 2001 Jack passed away. Jack worked everyday at Sanger Boats. He always said, “I’d rather die working than die in a rocking chair.” He loved building boats and off shore headers, and he was able to see that love fulfilled in the success of the two businesses he created. From flat bottoms and hydros, to cruisers and off-shore alley cats, Jack built them all. He was well known for his hydro boats in the early 1970’s and went on to become famous in the boating industry.

Jack was always on the cutting edge of boat design and adapted easily to the current demand of the industry. Building a high quality, hand laid wood and fiberglass boat from the ground up was Jack’s specialty. Today’s boats are still built with the same focus on quality and craftsmanship. When you see a Sanger Boat, you know you are seeing the best quality possible in the industry.

Sanger Boats is a second generation company that lives on today through siblings Mike and Kathy Davidson. This company was started by Jack and is owned exclusively today by Kathy and Mike. Today’s boats are designed by Mike. Mike worked beside Jack since childhood and learned the art of designing a unique, quality boat from the best. Today, it is Mike who is on the cutting edge of boat design for the current industry demands. Kathy manages the day to day business operations of Sanger Boats and Stellings Marine Offshore Headers.

Kathy continues her father’s passion for the offshore headers and boating adventures at the Delta in California. She enjoys boating on the Delta on one of Jack’s 30 foot Alley Cats. Kathy has also expanded with a new division called KD and Company. Through this company, Kathy creates all the unique “Sanger” apparel you see today. You can still find the well known registered logo of the “hydro guy” on many apparel items and accessories. KD and Company has a full line of Sanger accessories and apparel, as well as gift items for your pleasure.